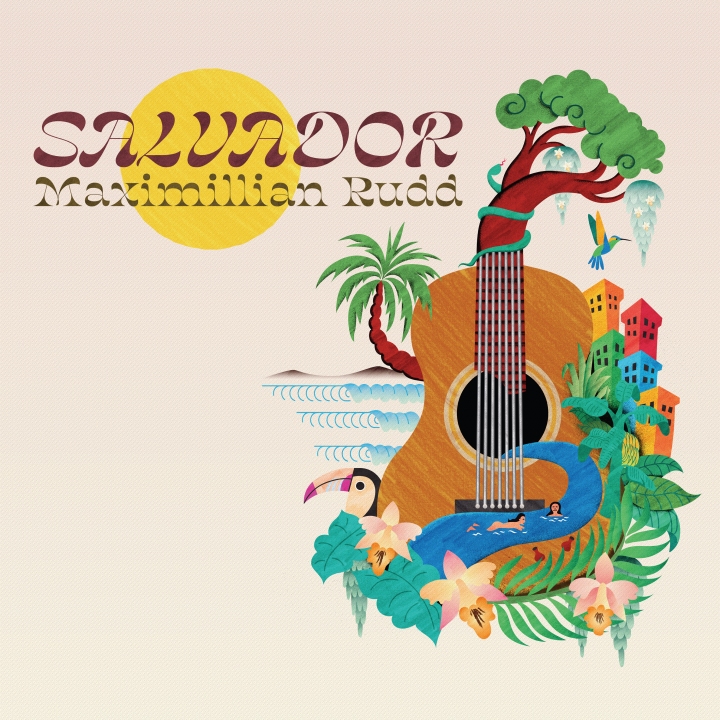 The brand new album Salvador is now streaming worldwide and is available on CD via the online store.

Hailing from Torquay on Victoria’s Surf Coast, Maximillian Rudd has carved out a name as an emerging exponent of the Brazilian seven-string guitar. The intimate bossa nova stylings of So Bad and the exuberant samba Total Football reinforce the notion that Brazil might be far from Rudd’s eyes, yet remains close to his heart.

From the New Orleans-inspired jilted love song When I Found Out, to the soaring vocal melodies of Come Sun and Sunset, Rudd has spent the past two years maturing his sound and honing his craft as a guitarist and singer-songwriter.

Track by track, Salvador traverses a spectrum of emotions, hitting on a nostalgia for South American folklore and the spirit of Brazil, which is a mainstay of Rudd’s style. All this is underpinned by blues and roots influences, culminating in a heartfelt tribute to the late Fats Domino in a ballad-inspired rendition of Blueberry Hill.

Respect your elders 🤫 Brazilian guitarist Dilermando Reis (1916-1977) was a prolific composer who departed this life having left some 23 LP recordings as a soloist, and a number of others as an accompanist. Interestingly he was the teacher of Bola Sete, a Brazilian guitarist of fame in the US for his appearances alongside the likes of Dizzy Gillespie. This work was dedicated to Abel Fleury (1903-1958), a wonderful Argentinian guitarist-composer who left an enormous legacy of young guitarists performing the folkloric music of his country. There are some moments in the B section reminiscent of Fleury's style, and on this measure Dilermando Reis has managed to celebrate him whilst staying true to his signature flair. Raphael Rabello was principally responsible for reviving Dilermando Reis' repertoire in the 1980s-1990s, and thanks to Rabello's unending creativity and ability to reinvent the old tunes for modern audiences, many guitarists today perform this work, from classical guitarists like Xuefei Yang, through to contemporary giants Marco Pereira and Yamandu Costa #dilermandoreis #violão #setecordas #classicalguitar #choro #violãobrasileiro
Geelong and Surf Coast friends. @editionsddv and I are playing a special concert to celebrate the Brazilian seven string guitar this Saturday. Tickets link in bio. Catch you there ☀️🌴#torquay #whatsongeelong #geelongmusic #geelong #windfire #choro #violao #guitar
Stoked to share my rendition of a magnificent composition by the enormously gifted Brazilian guitar icon @yamandu.costa.oficial. This piece is called Sarará, and is inspired by a healer who rides from town to town on horseback. Lots of gaucho music imagery and idioms in this work which is in the style of a chamamé. Yamandu himself is from southern Brazil’s border region and so brings much gaucho influence and pride to his life and work. I am always happy to play his music for the simple reason that it is just so good. Sensitive, unencumbered and spontaneous in that unpretentious Brazilian way. I was very fortunate to have spent some time with the man when he visited Australia some years ago. He’s a real family man and unbelievably dedicated to his art. Long live Yamandu! #yamandu #violao #setecordas #violao7cordas #yamanducosta #sarara #musicagaucha #riograndedosul #chamame
I’ve been very quiet here lately my friends ☀️ Don’t tell Zuckerberg but life without Instagram is infinitely better. I haven’t stopped making music, in fact I’m making more music than ever, but I’m enjoying the freedom to not make a post every other minute of the day. The downside of that is that those who possibly enjoy what I do will inevitably miss out on what’s going on. But it’s all around you if you look up from your phone every once in a while 🪴 Today I felt like releasing something from the archives, so here goes. Tonight on YouTube from 7pm the full video goes live. Later on I’ll share that here. Stay warm, stay in touch, and stay off Instagram 😆 Link in bio ❤️ Love you all 🎶 @yamandu.costa.oficial #violao #gaucho #chamame #sarara #yamanducosta #violao7cordas #setecordas
Alô… Dino falando 📞 #setecordasdeaço #dino7cordas #baixaria #choro #melbourne #mpb #musicabrasileira #violao #dosouto
Playing tonight with new Melbourne-based samba outfit Arisco. Hot and sticky out there today just like Rio 🌴☀️ Come steam it up on the dance floor and @baroussou from 9pm
Loading Comments...